Runner up of the 96 hour modding marathon hosted by Searge of MCP, known as ModJam.

This mod adds an Aesthetic feature onto players, namely Hats!
(No, this is not a TF2 Mod)

This video explains how to use the mod to it’s full potential:

This is an early video of the mod when it was first released. 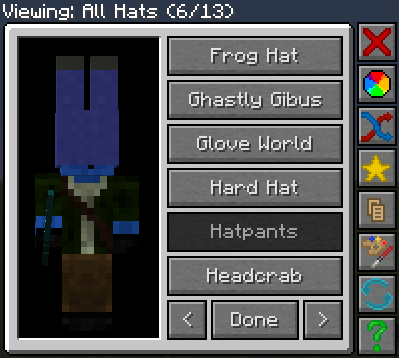 How do you choose a hat? Simple! Hit H on your keyboard whilst in-game and a Hat Selector GUI will pop up. This GUI shows you all your currently installed hats and lets you choose one to wear. 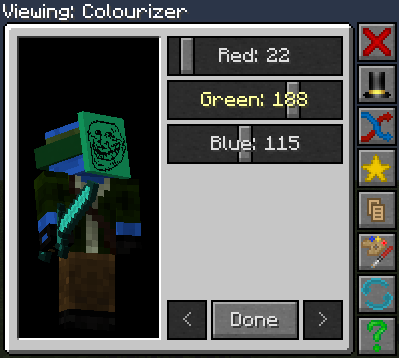 There’s also a colourizer option, allowing you to apply Minecraft’s colourizer on hats you wear. When you’ve decided on a hat, hit done and your hat will be displayed for everyone (on the modded server) to see.

If you installed a new hat and join a server with the mod, the mod will send the hat to the server, and the server will send it to all the players in your vicinity, so that they can view your hat, as well as use it.
(as this may pose a security risk, this can be disabled. However, by installing the mod, you accept whatever risks (although minimal) that you may encounter, without putting me or the mod liable. I have, however, tried to minimize the risk with my very best.)

What else do I need for this mod? What version should I get? Help? Answered on the FAQ.

Like the Back Tools mod, this mod is slightly incompatible with Smart Moving and Mine Little Pony and all mods of the like. Floating hats will occur, and there is nothing I can, or will, do about it.

Right now I’m planning on adding Hat Packs in the future, but for now there’s not enough hats to make a pack out of, so feel free to download any of the models from Techne Online. Drop the tcn file in the hats folder in the root of your minecraft jar (Where /mods/ is). Yeah… You can have a Xenomorph hat, if you know where to look.

Alternatively you can also make your own hats using Techne! You can check my post here for info.

This will be changed in MC 1.8 where Hats will be using a Tabula format instead.