As a few of you guys know, Portal Gun has been undergoing a complete rewrite, but due to the release of 1.4.6, its release had to be pushed ahead, slightly incomplete. These updates to return content will come in the future, after which I will move on to new content.

Anyways, that’s not the objective of this post. This post if to inform you guys of what’s new/changed in the rewrite. 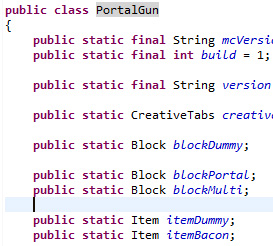 Most of the base code that makes the mod what it is has been rewritten from the ground up. This, in the end resulted in cleaner code and a better (lots) working environment, as well fixing a couple of potential issues in the future. 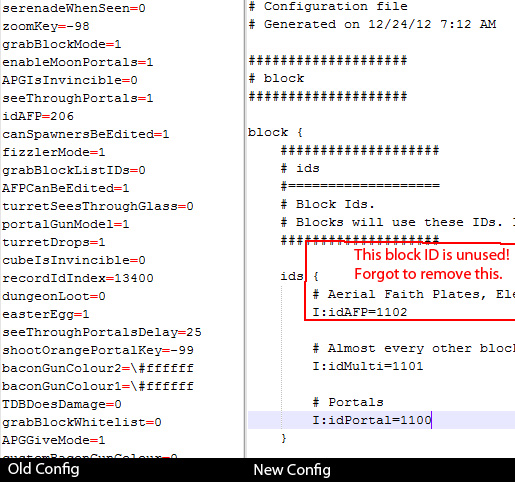 As a couple of you who may have noticed (*cough* non-modpack users *cough*), the config file has been redone, also from scratch, and also using forge’s Configuration utility. As you can see from the picture, the old config was kinda messy, while the new config is much neater with appropriate comments.

Also while you’re looking at the picture I would want to highlight that there is an unused block ID in the config, which will be removed in future versions, and that the default block ID range has been moved to 1100 onwards.

Also would want to add, there used to be 3 config files, client (with LAN map settings), server, and map settings. That has now been changed so that client and servers share the same config, while the map config itself is a standalone which gets loaded every time the map is loaded.

With the new code base, it has become easier for me add new mod parts. Therefore the mod parts have been reorganised, giving each specific category a more precise individuality. Want portal guns, but no long fall boots? You can easily disable them, like I’ve shown in the picture above, Grids, Lasers and Checkpoints as well as Long fall boots have been disabled (for example purposes only).

As with the rewrite comes some a new API that is packaged with the release, for use of modders. Say, you don’t want the turrets to shoot at your Entity, or you don’t want certain blocks to be picked up, use the API. The mod also accepts IMCMessages sent before @PostInit, with the same names as in the API, send the list in a string as you would list them out in the config file to “PortalGun”. There is also an additional IMCMessage accepted referenced as “BaconMod” for the key. Simply put your Class (containing a static reference to the item) and Item field name in as the value, eg “gravigun.common.GraviGun, itemGraviGun”, and the mod will use that item in place of the raw porkchop used for the bacon gun.

If you are just an average user, this will be what you’d be looking for.

The rewrite is INCOMPLETE!

Right now, mainly because of the release of 1.4.6, the release of the rewrite had to be pushed forward at an incomplete stage. For now the mod is lacking a couple of items, most notable are See through portals, Fizzlers, Lasers, and checkpoint blocks. ALSO, it is incompatible with previous versions of Portal Gun. Most items will survive, but many blocks will not.

PortalGun now comes with an update checker. While it checks that your sounds are all downloaded, it also checks for a new version of PortalGun. If there is an update you’ll be notified once you join a world.

There’s a couple of new/changed recipes, these changes are permanent and will not be changed any time soon.

No, I’m not. There have been many complains of the mod being over powered so this is my solution.

“No way, I am not going to be able to fight a wither!”

Then I would suggest you begin dungeon hunting:

Portal Guns (All 5 of them), Spawners and Fizzlers have been added to dungeon loot. It is at a low, but still possible chance.

See Through Portals have been disabled for now 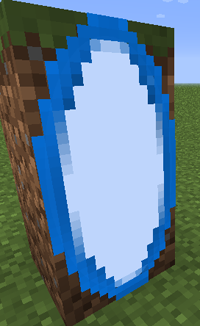 As this being a rewrite, I am looking for a new way to render the portals as see through, so for now see through portals does not exist. The portals which have a link to them will render as “open” state, if the link is loaded within the area.

Placement of portals have a preset range (previously being “as far as the world is loaded”) and can go up to 10000 blocks by default config now. Portals themselves should have no issues and will keep the chunks the bottom half is in loaded, like your average chunkloader.

You can hold and release R to remove both portals of the particular gun you are holding, or you can hold R and hit the Left mouse button or the Right mouse button to close just one of the corresponding portals.

Many thanks to the collaborative efforts of both L5_ and mr_hazard|d95, there is now a new PortalGun model to be used! It is used on the pedestal as well, replacing the old model.

Grabbed entities (including blocks) can transverse through nether portals now.

Yep, go ahead and bring that blaze spawner to the overworld, I dare yeh. 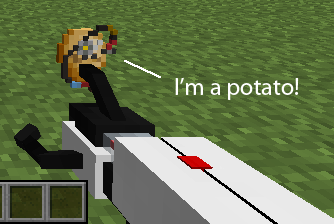 Yep, it’s finally here. There’s finally potatoes in Minecraft. With a bit of nifty redstone workmanship you can craft a PotatOS (recipe above), and attach it to a Portal Gun!

And yes! It really talks!

Compatibility with the Gravity Gun mod

Both mods communicate with one another to avoid conflicts with grabbed entities.

No longer will you be confined by Integral power!

Yep. From now onwards Portal spawners will drop with whatever configuration you set them saved. It is stored in the item, so any mods you have that places Items can be used to place them down! Props to Tahg for requesting this. 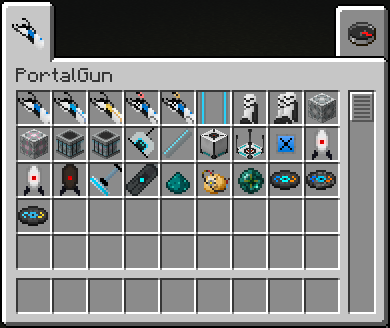 PortalGun has its own Creative Tab for listing down the mod items now.

Well, that’s pretty much all the new stuff I can list down for now (that I can remember).

Have fun, and season’s greetings!