It’s that time of the year again, 5 years ago I released the very first version of Portal Gun on Minecraft Forums. About a week ago, I posted this video on YouTube:

I’m not one to want to disappoint, but I had tweeted a while ago, not to expect anything too great out of today. So those of your expecting a release today, I’m sorry to have to say that this is just an announcement. I was planning on releasing it today but due to various circumstances, being abroad and unexpected bugs during development being a few of them, the mod is not ready to be published just yet. I won’t be posting an ETA on here though, it’ll be released when it’s done, which hopefully will be Soon™.

So, what is this announcement for?

I’d like to announce now that Portal Gun is being rewritten. What, again? Yes, again, that’s like the 4th time now. Thing is, last time I did a proper rewrite of Portal Gun, was over 3 years ago, and since then, I have learnt a lot. I’m sure a lot of you have seen Doors, or maybe even the new Gravity Gun, so I dare say a lot of things will be different with the new Portal Gun.

Also, since development for this is active, I will also be streaming development of the mod when I can, so if you want sneak peeks, do watch out for them.

First off, if you haven’t noticed already from the teaser video, see through portals will be making a return. The last time they were used in Portal Gun was back in Minecraft 1.2.5, and it was written by ChickenBones, but they were removed due to performance issues, so many of you may not have known it even existed. With rendering being a lot more efficient in MC1.8, I tried once again to bring it back, and to do it to my best ability this time round. As of the current development build of the mod it’s still not perfect, but it’s getting there! Doors taught me quite a bit in that regard as well.

Next up, next big thing is that you’ll be able to configure your own channels for portal guns. Previously all you had is the default, p-body, atlas, personal PotatOS, and personal bacon portal guns. That left you with only 2 personal channels and 3 global channels with little to no use. That’s gone now and you can make as many channels as you’d like, and they’d all be unique per player.

Third, I’m trying to think of the mod of a more “survival” point of view. Portals can now be of various sizes. The smallest being a 1×2 portal, it’s size can be upgraded. At this time I’m thinking of letting the max be of a 5×5. “Why this change? The Portal game didn’t have that!” you ask? Like I said, I’m trying to think of the mod from a more survival PoV. Have you ever found it strange that a 4x4x4 ghast, lightly bumping into a 1×2 portal, suddenly appearing on the other side of the portal? Well, that leads to the 4th point.

Fifth, gameplay changes, for starters, no more dungeon loot. That just didn’t make sense, really. Recipes are likely to be changed from before, oh, and also, no more naggy “WIP” items. Yay!

Sixth, I want to say that the mod overall works better and looks nicer, but since I’ve not gone to the “prettify” stage of development yet, that can’t be said for sure.

And that’s about it guys, Portal Gun is once again under active development for the time being, and I hope you guys will be happy with it when it’s finally out.

Also shoutouts to the many, many people I met over the past 2 weeks whilst I was frantically trying to write this mod on a 2015 MacBook Air (which to my surprise actually supports see through portals).

EDIT: As I don’t read the comments anywhere on here, discussion available on Reddit.

EDIT2: I also just remembered that grabbing entities have been nerfed and can be upgraded over time to grab tile entities as well.

1.7.10
– Attempted fix for sound not playing due to it attempting to play while the sound engine launches.

That’s all the updates for now since the unexpected downtime. Thanks for bearing with us!

For the past while I’ve been working alongside with madjake45 and Quetzi on working on a web service to easily list down the list of mods you have with an easy and simple way of sharing them, and only just now it has finally launched!

I won’t go to long detail here, but you can find out more on the website itself.

– Fixed spawning of ghost wolves when Items were grabbed then dropped out of the inventory gui. 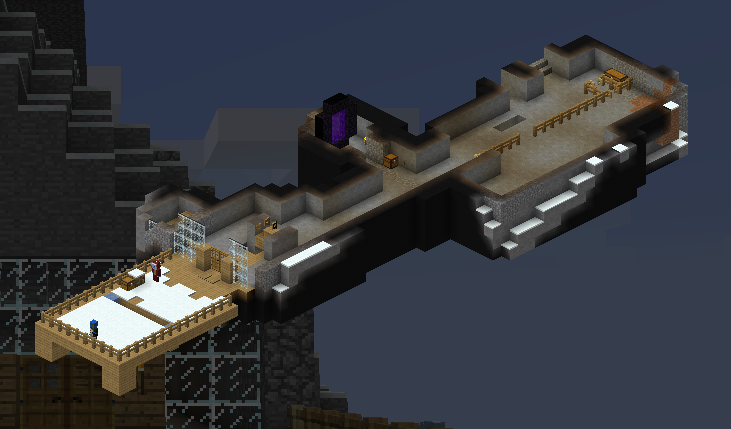 – Fixed int configs wihout a min/max or boolean value
– Fixed changing configs with the scroll wheel if the config page has a scroll bar
– Fixed crashing on login due to receiving packets too early
– Fixed rendering issues with items that are locked in the bow animation when switching from third person to first person while using the item.
– Possibly increased compatibility for the Patron Effects
– Added required ATs for Blocksteps and Bee Barker
– Added functions required by Blocksteps and Morph
– Added two new patron effects, for Q3 and Q4 of the year.

This is just a quick update post on what’s been happening lately in regards to my mods and such.

Right now I will have to admit that I am not in active development status, I’ve not been doing any dev work for quite a while with regards to life being busy with stuff and such. I do have some news however, once I get back into it, here’s what you can expect (before you ask, everything stated here are for 1.8 unless stated otherwise):

After that, I’ll continue work on Morph for 1.8, which is getting a revamp in terms of both Abilities and a lot of internal reworks. Things *will* be changing for Morph in that version, and I’ll look for your feedback as usual as things develop. If I get bored of Morph, I will be working on the other mods I’ve not ported to 1.8 yet.

Demand for mods in MC 1.8 just isn’t great. There aren’t that many people on 1.8 yet and a lot of other mods have not been updated. As most of my mods aren’t normally main mods, there isn’t a high demand for my mods to be updated to 1.8. The few that already are, are still getting more downloads for their 1.7.10 counterpart. Because of this, I’ve actually resorted to putting porting mods to 1.8 low on my priority list as I handle things going on IRL for the time being.

I’m still keen on updating my mods to 1.8. Same goes for MC 1.8.8 whenever Forge is released for it. I see no reason to keep things on 1.7.10 when there is a newer modable version of MC available. I have things planned in terms of optimization of a couple of mods as well as gameplay changes, of which I’ll definitely have to get feedback from you folks in the future.

As with how I’ve been doing with all my mods for the past few years or so, I only support the latest versions of mods, therefore if the mod has a 1.8 version available and there is an issue on the 1.7.10 version but not on the 1.8 version, *do not* expect it to be fixed. Another thing is, I have completely dropped major support for the following mods: Morph, Sync, Hats, Portal Gun. There are reasons for this, but I will not go into detail.

That’s it for now folks, sorry for long post, and not sorry for no tl;dr, I just felt like typing something and I figured an update would be nice.